skip to main | skip to sidebar

Hello everyone!
I have not personally had a knee replacement but this is what I've learned from taking of care of my husband through his.
We've known for years that Jeff needed a knee replacement but because the prosthetic joints wear out, just like natural knees, doctors won't do replacements until you get "old enough" Jeff just turned 53.
Before the surgery, find about your hospitals policies. And you might want to ask more than one person there. I asked the nurse who did Jeff 's pre-admitting if visitors could stay all night at the hospital. She said absolutely not.
So I went home the evening after Jeff's surgery. He had a very bad night and I decided I would sleep in my car if I had too, but I was going to stay close. That pre-admitting nurse was wrong and family members were allowed to stay there whenever they wanted.
That same nurse also said all the rooms were 3 people rooms and the hospital was almost always full capacity. So we were pleasantly surprised when Jeff had a private room and most all the rooms around him were also private rooms.
Jeff stayed in the hospital for 7 days. His surgery was on a Friday. Most of the hospital activities seem to almost shut down over the weekend so he pretty much stayed in bed all weekend except for going to the bathroom at first with a wheel chair and then on crutches.
On Sunday, he talked to the head of physical therapy. He set Jeff up for a week of intense physical therapy in the hospital. Physical therapy to get the joints working again seems to be equally important to regaining mobility as the surgery and Jeff was ready to do everything they asked of him.
Now that we are home, he is going to out-patient physical therapy 3 days a week as well as exercises at home and slow walks around the block.
Hospital food is not wonderful. Neither is the cafeteria food. Both are edible but only if you are hungry.
The hospital had lots of vending machines but none took paper money larger than $1. I took quite of few with me but ended up needing a few more.
I wish I had taken a few snacks with me too.
Lots of equipment comes with surgery. Besides a wheelchair for a little while and then crutches, we have been using these things too....

DonJoy IceMan
this is an electric ice pack system that works great! 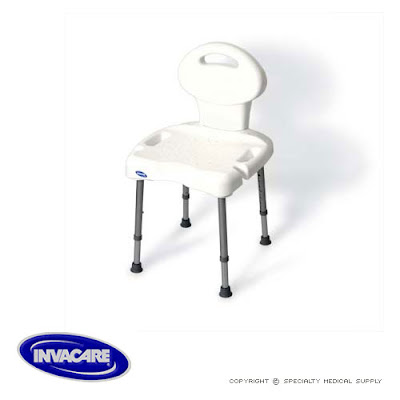 a shower chair -
before the surgery, Jeff installed hand-held shower heads in both our showers. 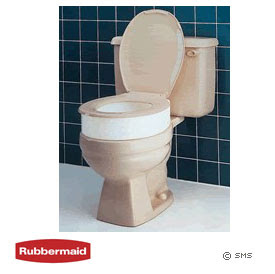 A raised toilet seat because squatting is not allowed or even possible very soon after knee surgery.
Jeff also had a pile of medicine including different pain relievers and a blood thinner. He also learned to give himself injections for blood thinning to prevent clots. We thought these would of been a big deal but he learned to do it quickly and had no trouble giving them.
While having all the tests before and after surgery, Jeff's blood pressure and blood sugar levels were somewhat elevated so he got instructions to eat low-fat, low-salt and lower calorie.
Trays for eating at home are nice.
Store up extra ice for icepacks.
Nightlights are good - both for the patient and the caregiver.
Easy to prepare meals at home are essential. I had planned a few ahead and wish I had planned more.
Any loose rugs that will be in the main path of a person walking with crutches should be put away to prevent slipping.
Have some thank you cards and stamps on hand.
Jeff feels good and his new knee does not pop, lock up or give him constant pain like before.
The new knee does not move quite the same as a natural knee though. He is working on his range of motion but so far, it is limited. When he rides his recumbent exercise bicycle, he cannot make a full revolution yet with the pedal.
All in all, we are both glad he had the surgery and are looking forward to more active and normal life.

Thank you so much for spending some time and leaving a comment at A Home With A Smile.

please visit me at my new blog
"If You Do Stuff, Stuff Gets Done"

looking for an old post on A Home With A Smile?